It's hard to tell when the PLAYER is speaking on FB messenger. Is there anyway to display some kind of tag for the player, like *YOU* or even through the API to grab the player's actual name?

The problem is when there's a string of comments by a character, their name is only mentioned once. But after the PLAYER talks, there's nothing that remains that shows he/she has spoken. So if you're reading back through the log, it's hard for someone to tell that they did speak. Keep in mind new players might not even understand that the story speaks for them at times.

example of a log of an exchange between a Character and a player. I'll attach a picture, too. 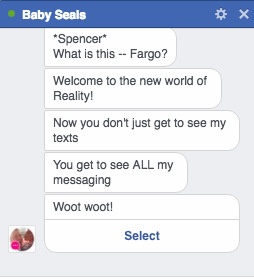 Yeah. Unfortunately, it's an API limitation. This should/will (hopefully) improve over time as the UX improves.